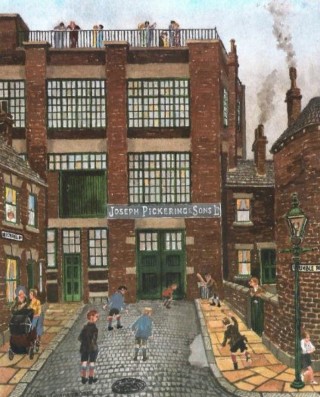 Illustration of Pickering and Sons taken from "By George! My childhood in Sheffield." Page 69. 1987
Photo: Paul Hibbert-Greaves 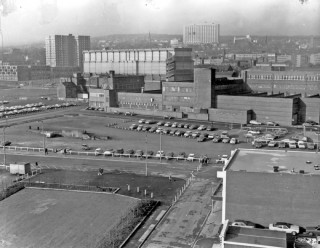 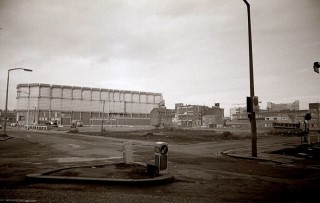 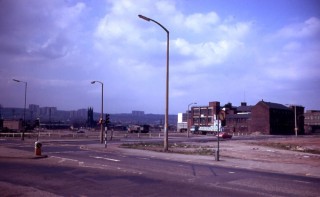 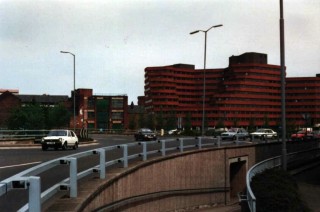 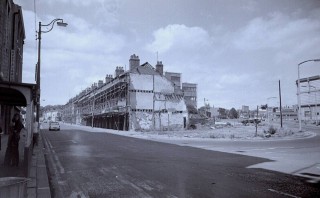 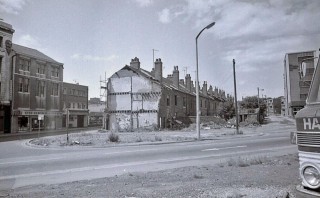 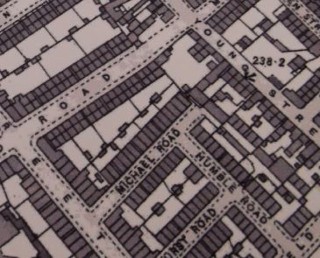 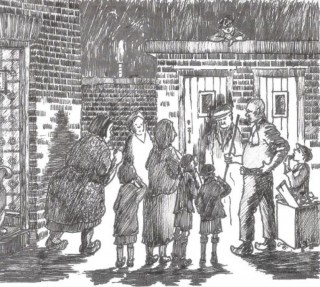 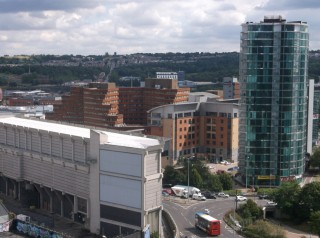 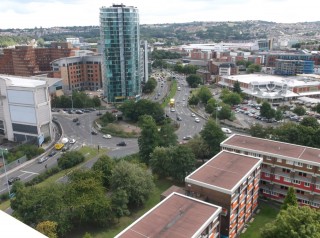 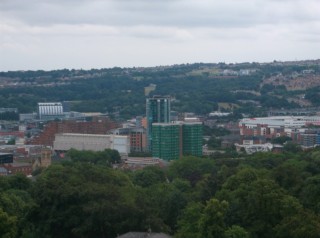 The picture shown below the painting of Michael Road shows an elevated view of The Moor, Young Street and Bishop Street, looking towards Broomhall/ Broomhill, No 55, Moore Street, Richards Bros. and Sons Ltd., Cutlery Manufacturers, right. It also shows the Electric Sub-Station, Broomhall Flats and the Hallamshire Hospital in the background. In front of the Electric Sub Station you can see the buildings for Joseph Pickering’s Factory and behind that demolished where the former Michael Road would have stood.

‘The first games of football sometimes overlapped the cricket season and the last few matches were played on the pitch at the end of Michael Road. Our stumps were the chalk-whitened grating of the petrol store on the back wall of Pickering’s cardboard box factory with the causey leading up to it the ideal length for fast bowling, whilst the camber of the road was a great aid to in-swingers.’ ‘Mr Bliss, the printer, lived in the house alongside the wicket and he often leaned on his backyard gate and acted as umpire. His son Ken turned out for the games which gave us double advantage of not being chased off the street if play got too rowdy and also that his mother could be relied on to provide cups of water in between overs.’

‘Denis Faraday and his constant partner, Arthur ‘Ginger’ Noakes, always had first and second knock, because they were two years older than the rest of us and it was Denis’s bat anyway, even if it was only one that his father had made from a piece of packing case. Denis slogged the bowling all over the neighbourhood, bouncing the ball off the walls, gable ends and sometimes us.’ ‘Vinny bowled his heart out but to no avail and had to retire to Mrs Guy’s doorstep; and Norman Blackwell, sweating and dispirited after several overs, threw the ball to me. “Thee ‘av a gu,” he panted, acknowledging the claps from a couple of dancers on Pickering’s rooftop.’

‘I walked away, tossing the ball from one hand to the other in the county style and accidentally dropped it in a puddle before wheeling round to thunder up in the best Harold Larwood tradition and letting fly. The ball, made of soft rubber and accelerated with water, didn’t bounce but shot under Denis’s upraised bat. “Owzat!” I screeched. The tell-tale wet mark on the middle stump bore stark witness to my prowess.’ ‘Mr Bliss pointed to the pavilion and with a meaningful look at me Denis handed the bat to Ginger. I walked back for an even longer run-up and taking care not to squeeze the ball, I charged with clattering studs, a grunt of determination and skidded the soggy sorbo past Ginger’s flailing bat and demolished his leg stump. Mr Bliss raised an arm and went to the lavatory as I stood in disbelief, nervously pulling up my socks in the silence which followed this second outrage.’

‘Arthur flung down the bat in disgust and he and Denis came towards me with out-stretched hands. Congratulations? I assumed so, and extended my own puny paw which was instantly seized in a vice-like grip by Denis. With a malevolent smile, Ginger took my other wrist and with practised thoroughness rotated the bare flesh on my skinny wrist in the dreaded Indian Burn torture.’ ‘Performed by an expert, the grip soon had me yelping like a pup with its tail trodden on, my moment of triumph washed away by the salt tears of anguish. The rest of the players stood at a distance, jeering my ungentlemanly conduct and shouting encouragement to my tormentors. I was flung off, snotty-nosed and snivelling after this demonstration of authority, to stumble away to Vaughan’s and seek comfort in a ha’porth of chips, not sorry that the cricket season was over.’

I found the map shown on the right and it shows Michael Road in 1894. Although George and his family would not have been living on Michael Road until 1924 onwards, the map shows what that street would have looked like and that it would not have changed dramatically. The map gives evidence to the painting of Michael Road, which showed the street as a dead end at the back of the Pickering factory.

In the summer of 2014 a group of Our Broomhall volunteers took the opportunity to go on the roof of the Hanover Tower Block which was an amazing experience as the views were fantastic. One particular view as shown on the two pictures below the Bonfire Night painting show the exact area where Michael Road would have been, approximately where the skyscraper and roundabout are situated now. The Electric Sub-Station is still there in the bottom left corner of the picture and the frontage of the Pickering factory is also still there today however, it is hidden behind the Electric Sub-Station on the pictures. The final picture was taken from the top of St Mark’s Church and shows the area which from that view 100 years ago, it would have been much different with back to back houses stretching across Broomhall.

‘Our back door began to stick with the cold dampness of November and a smoky vapour hung around the gas mantles on the street lamps and in the house, but it didn’t matter so long as it kept fine for Bonfire Night.’ ‘I had saved twopence and went down after tea to Mrs Timbo’s for a packet of sparklers and a penny banger. Already the evening sky was glowing with the light of thousands of backyard fires as I hurried back up Humble Road. From one entry the flames looked particularly inviting, so I thought I would take a peek.’

‘In the middle of the yard, piled high on the grate to avoid melting the asphalt, a huge fire was blazing, fanned by the stiff breeze and stoked up by a stout gentleman who seemed impervious to the heat, as indeed he ought to have been, for I knew that he was a furnaceman at Sammy Osborn’s, from his son Ron who was in our class.’ ‘Mr Watters, not having been long home from work still wore a sweat towel and seemed to be enjoying his busman’s holiday. Standing with arms akimbo, displaying his manly figure, girdled by a leather belt studded with army badges, to its full advantage, he scrutinised the conflagration with an expert eye. All the people who lived in the yard were gathered round except old Mrs Hilsop who sat fat and toothless on a chair in the doorway of her house, with a glass of Guinness and a toffee apple, sipping and sucking in turn.’

‘Slabs of parkin were dished out and a cup of lemonade passed from hand to hand and I munched away blinking, scorching in front from the heat and freezing behind until the delicious moment came to turn around. When the fire was at its height, Mr Watters threw on the Guy amidst a great cheer and a shower of sparks which drove us all back.’ ‘Rockets shot from bottles, Catherine wheels whizzed and spluttered on the clothes post. I lit a sparkler, and a Roman candle imparted an angelic glow to Mrs Hilsop’s cheeks as she tottered across the yard to the lavatory. Pint mugs of tea for the grown-ups and for the kids a second bottle of lemonade was opened rousing the excitement up to fever pitch, until muffled screams and a shouted “Ey oop!” abruptly halted the festivities.’

Who committed the crime?

‘The closet door opened and from its dark interior came a belch of smoke which cleared to reveal Mrs Hilsop in a state of some confusion with red-rimmed eyes and hair awry, clutching her heart with one hand and trying to pull up her bloomers with the other.’ ‘Two ladies rushed to her salvation and the restoration of her modesty. Their queries – “Wotever’s the matter, luv?” and “Ar yer orlright?” – remained unanswered by the apparently deaf and smoke-blackened matriarch, until sympathetic hands had helped her back to the safety of her armchair and administered relief with smelling salts and stout.’ ‘As these took effect, and the colour returned to her nose, Mrs Hilsop gasped: “Sumdy shoved a banger o’er top o’ closet door, just as ah wor gunna sit darn!” Cries of horror and disbelief at the outrage culminated in women shaking their offspring and questioning them with “Worrit you, y’ little devil?” ‘And from Mrs Watters came: “If ah thowt it wor one o’ mine ah’d throw ‘im on fire missen!” Mr Watters, in an attempt to maintain his position as the leading figure, threw a box full of shavings on the fire, resulting in a quick flare of light and in one fleeting moment before I ran down the passage I was certain Jimmy Wrathfull’s face, lit like a fiery imp, grinned at me as he vanished off the lavatory roof.’