You are here: Home>Explore OUR Broomhall>Topics>Art>George Cunningham: The Man and His Art ~ Introduction

George Cunningham: The Man and His Art ~ Introduction 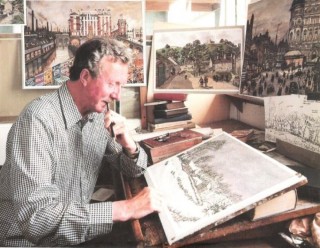 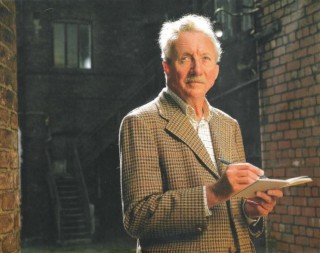 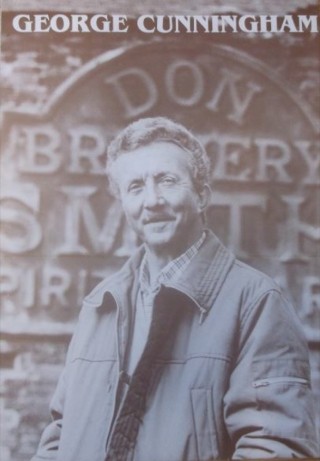 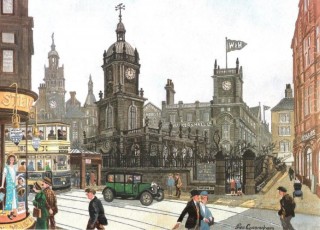 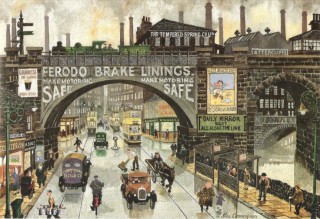 Attercliffe taken from "By George! My childhood in Sheffield." Page 87. 1987
Photo: Paul Hibbert-Greaves 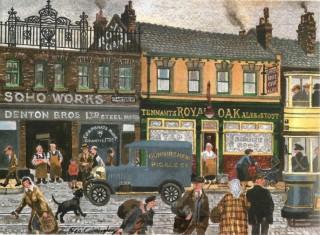 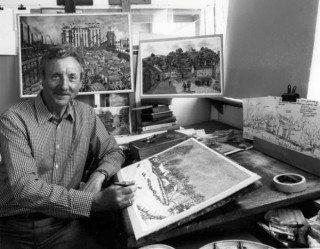 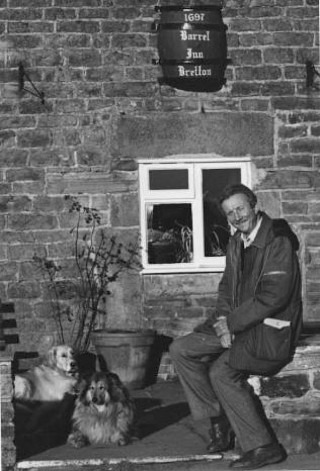 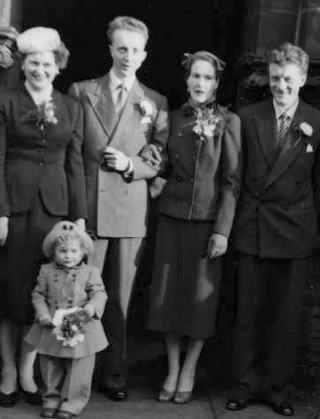 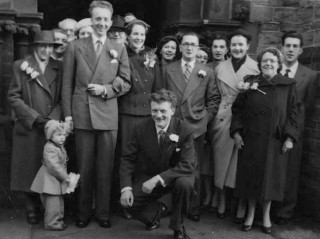 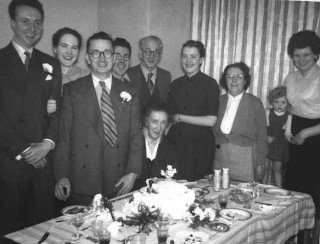 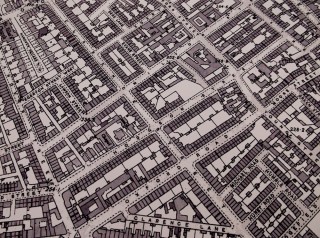 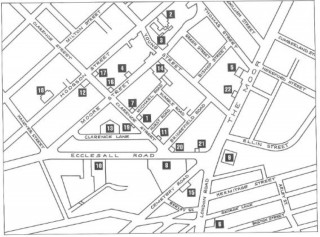 Map taken from "By George! My childhood in Sheffield." Page 112. 1987
Photo: Paul Hibbert-Greaves

George Cunningham was born on September 3rd 1924 on the corner of Michael Road. He lived in and walked the streets of Sheffield and more importantly Broomhall.

He was an artist who loved painting the streets and characters of anywhere he encountered which these pages will celebrate.

My research project started in the summer of 2014 when I discovered the By George! and More George! books which shows some fantastic childhood memories, paintings and much more which were written and created by George Cunningham himself. I then went and started researching at the Sheffield Archives and Local Studies Library and found some interesting information to make a really exciting project. I managed to get in contact with George Cunningham’s niece who sent some fantastic pictures which really add an interesting aspect to my research project.

A lot of the stories that George wrote in the two books By George! and More George! are shown on the other pages on this site along with pictures that tell the story.

In the book By George!, the preface was written by Freda Hibbert, Hibbert Brothers Limited, ‘The Art Shop’ and she explained how the business was exhibiting George Cunningham’s work as well as how their business relationship started. (courtesy of Paul Hibbert-Greaves/Hibbert Brothers).

‘George Cunningham was a regular customer at the Art Shop, long before we knew of his talents. A jovial figure in workmen’s clothes, always rushing in his half-hour lunch break, buying art materials and brushes in such quantities that we often wondered about his pictures-but never saw them.’

‘We singled him out among our customers, not only because of his pleasant manner but his great interest in art and the art materials he purchased, although he told us later that he never dared venture into the galleries upstairs for fear of being discouraged by other artists’ excellence.’

‘By accident we came across his paintings when a colleague brought some in for framing and seeing the signature we put two and two together. At last, after the long years of acquaintance we had proof of his talent. Encouraged, we advised George to attend a local art class but were saddened to hear that his tutor had told him he would never make an artist.’

‘Undeterred and unschooled, George carried on alone and the day finally dawned when he came into the Art Shop and produced a selection of his paintings for us to view. George seemed most surprised when we offered to put them up for sale, but we knew the public would warm to them, and so they did.’

These three paintings shown on the right are taken from the By George! book and show the amazing artist that he was as they all capture scenes of Sheffield city life. These three pictures are not of Broomhall but they show the Broomhall born artist and the amazing work that he did but also his life experiences that helped him visualise these scenes. For example, with the time spent accompanying his father around Sheffield in the Cunningham Pickle van he grew aware of the world around him. For other pictures relating to the rest of Sheffield see the two books written by George Cunningham and published by Paul Hibbert-Greaves/Hibbert Brothers and the Hallamshire Press Limited called By George! and More George!

George Cunningham came from a working class background but that did not stop him achieving an enormous amount with his talents and his fantastic memory which helped him retell his stories through his paintings. When George was younger he would not have had the materials or the space to be able to work on paintings. Emmanuel Cooper shows that ‘for working class people when thinking about art, there were the practical considerations to be made in terms of the availability of materials and equipment, their cost and the space in which to work. Great importance is placed on the artist’s individual vision and the uniqueness of the work.”[1] This explains why George Cunningham might not have been able to start painting when he was younger however, he did engage with literature from a young age.

In the Local Studies I found two publicity leaflets made by Hibbert Bros, Norfolk St, galleries in Sheffield 1984. These two leaflets explain the life that George Cunningham had and how his life experiences, shaped his ability to paint scenes and characters that he remembered from times gone by.

‘to exchange wielding a hammer and chisels as a die sinker for a painters brush and colours is a transition few people could accomplish. George Barringer Cunningham has successfully achieved that ambition at the mature age of 60.’

‘Sheffield born he spent more than 40 years at his craft working for “little mesters” and firms in the now sadly depleted cutlery and silver trades until being made redundant he ventured all on seeing if his hobby might make him a new career.’

‘So what more natural that a man who started painting at 48 and thought “the trams would run for ever” should use his photographic memory to recreate scenes from the past committing them to water colours, pen and ink, and oils for posterity.’

This leaflet shows George Cunningham’s character and how as it states he is ‘a man who can see beauty in a quartette playing dominoes in a pub or a street in Attercliffe but who is also just as much at home on a windswept moor.’ [2]

The second publicity leaflet shows how his life experiences really impacted the paintings that he created.

For example, ‘when he was eight years old illness confined him to hospital for six months and for more than a year afterwards he was unable to attend school. George spent his time roaming the streets, running errands and accompanying his father delivering pickles in the Sheffield of the 1930’s.’

‘This period had a deep influence on him, creating as it did, a store house full of the memories of people, and pubs, tram cars, shops and factories which now enrich his paintings.’

‘All his home and working life has been spent within a few miles of the Town Hall, even war time service took him only as far as a rocket gun battery at Shirecliffe.’

‘His love of the countryside, in all seasons, places him in a unique position amongst painters in that a tranquil village scene, a bustling city street or a lonely moorland road all have an equal place in his affections and his work unfettered by any formal training has an immediate and lasting appeal.’ [3]

George Cunningham wanted to apply to an art college but was not allowed so if he had had that chance he might have been painting from a younger age. Cooper suggests that, ‘if painters have studied at art school or similar institutions they will have learnt the methods and techniques of art such as how to use paint to achieve particular effects, the rules of perspective and the considerations necessary to achieve successful compositions. Equally, and perhaps more importantly, students at such established institutions as art schools would be told they are special and unique with gifts of creativity and self-expression which can serve themselves and society. However, working-class artists have no such recognition.’[4] This shows how George Cunningham proved his talent years later and even though he had not been schooled in art he showed his love for places and characters through his paintings.

Roy Newman writes on a DVD that I found in the Local Studies Library in Sheffield how, ‘A few years before his death I asked him if I could film a day in his life, he was “chuffed” with the idea. The BBC, so he said, had done a few minutes on him and his paintings and Sheffield as he knew it – and his thoughts on Sheffield today.’  This footage shows the man himself talking about his life, his experiences and his paintings. Roy Newman met George through the Sheffield Art Shop, Hibbert Brothers and he states that, ‘I was struck by a particular painting that could only be described as stunning. I bought it and it was that moment that I was introduced to George who had just walked in. This meeting started a firm friendship that lasted until his untimely death.’

The DVD about George Cunningham’s life is a unique three hour film featuring the life, paintings & interests of the great Sheffield Artist.

Disc 1 shows George in the playground of the former St Silas School explaining what his life was like at school, and then a walkabout outside the former Viners and St Silas Church. There was also a section named painting with George and an Interview with George.

Disc 2 features a walk about with George going to see the “Little Mester” and a tour of Sheffield’s finest.

Mr Roy Newman the interviewer is the Chairman of the Dinnington & District Historical Society where copies of this DVD can be purchased. The link to the website is shown here: www.dinningtonhistory.co.uk/products

The Interview with George on Disc 1 shows George explaining what first made him start painting after his failed attempt to get into an art school at a young age.

‘I was 48 years old and um I used to go out for a drink every night with the wife and all that, and err I don’t know whether the pubs were starting to alter or not then but I know they went over from pumps in my local to beer meters, and I think that was in my mind I thought well I don’t know I could do with some interest and err I thought I’ll have a go at painting and drawing.’

The first map on the right is one that I found at the Sheffield University Library from 1894, which shows the area that George grew up and loved and gives evidence for the map shown below.

The second map on the right was in the back of the By George! book and shows the hub of his universe, as he was growing up and that area was his universe as he stated himself. The key spots which are marked on the map are places where a lot of the stories in the book took place. A Map Reference is shown below: