You are here: Home>Explore OUR Broomhall>Topics>Art>George Cunningham: School Life ~ Part 2

The School Bully and Harry Flathers 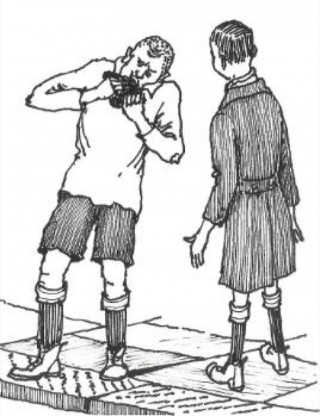 Illustration taken from "By George! My childhood in Sheffield." Page 14. 1987
Photo: Paul Hibbert-Greaves

George’s school days were impacted by school characters who might not have been over nice towards him or helped him in times of need!

‘My schooldays really started when Jimmy Wrathfull hit me between the shoulder blades with all the force of a stocky nine year old against a puny seven. The first bell had only just gone and with shivering interest and hunched shoulders I was watching a game of marbles when my cap, along with some hair, was snatched off my head by someone behind me.’

‘I spun or rather I was whipped round to see a boy, not so tall as me but twice as heavy, busily engaged in biting the button off my cap. His close cropped head was on one side to enable his teeth to get a better grip and he appeared to be growling as he worried away like a bull terrier. I knew that he was Jimmy Wrathfull, who had been pointed out from the sanctuary of the infants school, along with such advice as “Watch ‘im, ‘e’ll do thi!” One last tug and he spat out the offending button and flung my headpiece over the school wall, shouting the time honoured exhortation: “Foller thi cap!”

‘Whereupon I made the elementary mistake of calling him a rotten dog and then running, but not fast enough, to avoid the legendary Wrathfull back breaker. Hawking and honking for breath like an asthmatic donkey I staggered into the school yard to find my head gear being used for a football by a group of my new schoolmates. “It’s thine, is it?” jeered one of them, booting it at me as the last bell tolled and we trooped into school, shepherded in by Mr Hall, the caretaker, who then locked the gate and went home across the road for his breakfast.’

‘At school I was doing fairly well at most things but music and arithmetic were beyond my grasp. The little black notes in the tattered dog-eared books looked to me very much like ink blots spattered across the pages and long division sums and multiplication were a daily problem. Geography and history I enjoyed and they helped to form an association which was more of an alliance than a friendship.’

‘I was now on my second rung of my educational ladder in Mr Averill’s class and he had written on the blackboard in his flawless copperplate a series of questions about Africa. “What is the longest river?” “Which is the biggest desert?” There were ten to be answered and I was soon writing away confidently when I became aware of a long nose which seemed to be resting on my left shoulder.’

‘There was no need to turn round for I knew that it belonged to Harry Flathers. He was years older than the rest of the class, but his inability to assimilate knowledge had retarded his scholastic progress to such an extent that he was always two standards in arrears. His father was held in great respect around the district as a boxer who sometimes fought for as much as a pound note and he had passed on his skills to his son to such an extent that Harry was well on his way to fulfilling his destiny as Cock o’ School.’

‘I pushed my paper higher up the slope of the desk so that he could get a better view and the nose withdrew to be replaced at intervals as I steadily wrote down the answers. At the end of the lesson we had to stand up and read out our completed papers. When Harry’s turn came and he stood up, already tall enough to be breeched and with heavy shoulders and big hands, to rattle out eight correct answers, Mr Averill, blushing and pulling down his shirt cuffs as he always did when he addressed his class, said, “Well done, Flathers, you have improved remarkably since last week. Keep it up!” Harry did and it made his life easier and mine as well, at least for some of the time.’

‘At playtime later the same week, I was sauntering with hands in pockets around the schoolyard, wishing it was dinnertime, when with a whoop that curdled my blood, Jimmy Wrathfull jumped on my back, startling me so much that in spite of his weight I staggered with him riding piggy back half way across the yard before my legs gave way and I collapsed with Wrathful as usual on top. In the first place I think he launched himself at me with playful exuberance, but finding himself in a superior position his natural nastiness asserted itself and he started bouncing up and down on my crouching body, using my cap as a whip and shouting “Gid up then!” or “Whoa there!” as I tried vainly to dislodge him.’

Harry to the Rescue

‘I could hear shouts of laughter and cries of “Cum on, Steve!” from my schoolfriends, which encouraged him to increase the pace, when suddenly his weight had gone and I rolled over to see my jockey in the grasp of Harry Flathers. Strong though Wrathfull was he knew that he was no match for the skills of Flathers and protested sheepishly, “Nay, ‘Arry lad, ah wer ony playin’ abaht, ah thowt ‘e wer enjoyin’ issen.” My cap still dangled in his hand and as a means of reparation he banged it against the wall to dislodge the dust before offering it to me. My protector’s thin lips parted in what passed for a smile, revealing a set of dark oak molars which would have done credit to a chain-smoking shark as he noted this act of contrition. The little knot of onlookers, now silent, gasped as Harry rasped, “Thee leeav ‘im alooan in fewcher, dust tha ‘ear mi?”

‘He emphasised his point with pokes of a bony forefinger into my tormentor’s chest. Wrathfull made an attempt at a sickly grin and with a defiant shrug of his shoulders which fooled nobody he shoved his way through the crowd putting on a show of bravado by whistling through his teeth and occasionally spitting. There was no need for me to thank Harry. It wasn’t the done thing. So I gave him every chance to copy the subjects I was good at and reaped the reward for his protection. Jimmy Wrathfull kept well away from me as though he couldn’t trust himself not to inflict some bodily harm and thereby suffer retribution. So he had to make do with a long range scowl and knowing nods of his cropped head as if to indicate that he wasn’t quite finished with me yet.’