You are here: Home>Explore OUR Broomhall>Topics>Art>George Cunningham: Childhood Memories ~ Part 1 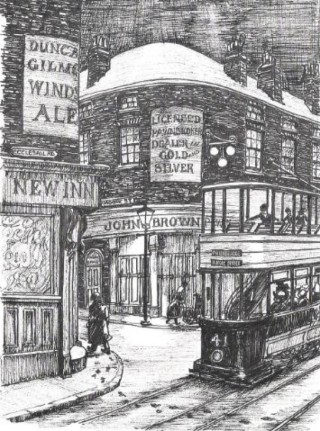 Illustration of the New Inn taken from "By George! My childhood in Sheffield." Page 32. 1987
Photo: Paul Hibbert-Greaves 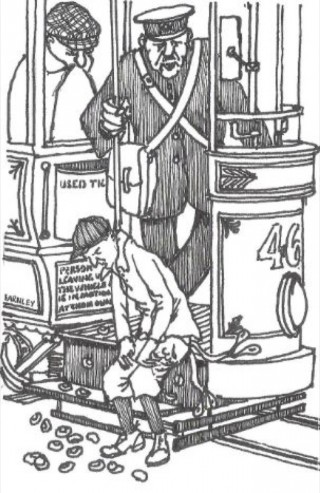 George Cunningham has a lot of childhood memories but the stories in this section focus on his friends Vinny, Norman and Albert Moxay who he spent a lot of time with and had many an adventure.

One of the first adventures that George made with his friends further afield was to Endcliffe Woods.

‘It was Norman who suggested we should walk up to Endcliffe Woods. It had snowed and then frozen hard for days as the three of us set off after Sunday dinner up Ecclesall Road with the snow crushing like gas coke under our boots. Already in the early afternoon dozens of people were on the ice, the older ones standing in little groups enjoying the feel of danger but not straying too far into the middle. We found a clear area of ice near where the water came in and started a slide, each time getting a little more daring, going almost to the very edge and causing a quacking consternation amongst the ducks who must have been annoyed already by having their pond taken away from them.’

‘Being Sunday no shops were open and in any case Norman and I were skint, but Vinny, whose Dad was a foreman bricklayer, lent us each an ha’penny, so that we could ride home. The tram was just pulling away as we ran out of the park but we jumped on with practised ease and clambered upstairs, jostling for position in the front bay. It was still light and I sat with my chin resting on the brass rail which ran round the window, aware of the coldness of the polished wooden seats as we swayed and clanged our way home.’

‘In spite of the cold I became drowsy and we seemed to have travelled a long way before the familiar landmark of the Star Picture Palace hove into sight. Gallons, the grocers, the Devonshire Arms and the New Inn gave me a warm feeling of going home. Even John Brown’s pop shop, with which I was to become acquainted, looked friendly; its three big brass balls glistening in the light of the newly lit gas lamps were the signal for us to disembark.’

‘The top deck was empty, except for us, and we ran along clattering all the seat backs the other way. We waited two steps from the bottom of the stairs, out of sight of the conductor, who was in the saloon, and just as the tram was passing Whitaker’s furniture shop we jumped one at a time on the bell set in the floor: clang! clang! clang! Then we dropped off with enough speed to carry us into Franklin’s shop doorway.’

‘October brought its bonus of blackberries and conkers and one bright Sunday morning Lloyd Dean, whose mother made the ginger beer, took Vinny and me beyond his father’s allotment into the unknown region near Wiremill Dam. I wore braces; but not to be outdone I unbuttoned them and tied them round my waist. Down the neckhole of my jersey I crammed as many nuts as it would hold.’

‘We boarded the tram, going upstairs as usual which I found a bit difficult due to the extra weight. In spite of this the tram made good time and I started looking forward to a bottle of ginger beer before Sunday dinner. John Brown’s came into view and I brought up the rear as we clattered down the stairs. Lloyd jumped on the bell, followed quickly by Vinny, and they were off the tram. I was a bit slow but landed fair and square to give a good clang.’

‘Unfortunately, the knot in my braces chose that moment to give way. My trousers, which were always bought big for me to allow for growing, dropped down and round my ankles, releasing a thunderous cascade of conkers on to the platform. To add to my confusion, as I desperately tried to pull up my baggy pants, the conductor came out of the saloon and politely requested me to: “Get them bloody nuts off my tram”. This I found rather difficult with one hand, so he rendered assistance by side-footing them and me into the gutter.’

‘I hobbled onto the causey with braces trailing and was in the process of disentangling them when a motor car cruised past, straight over my conkers. My friends joined me and we sat on the ledge of Stacey’s window contemplating the carnage. I wondered how anything so shiny and beautiful could finish up like that. I salvaged what I could and Vinny and Lloyd gave me some of theirs, so things didn’t seem so bad after all.’

Preparation for another Adventure!

‘On a warm August morning I strolled down Clarence Street with Vinny and Norman to the tram stop outside the Co-op. We were fully equipped for a long and probably hazardous journey. None of us had caps; Norman wore a jersey and tie, but Mam insisted I wore a suit; while Vinny sported a blue blazer with an open necked white shirt. Our rations, separately wrapped, were stowed in a brown paper carrier bag supplied by Mrs Crookes who had also generously donated to each of us an apple and a slice of seed cake.’

‘Mr Whitely, the manager of the butchery department, who lived on our street, waved to us as we waited, his pink cheery face broadening into a smile as he called. “Don’t get lost, will you?” I pressed my ear against the cast iron pole which carried the overhead wires and stopped breathing as I listened. It was generally known that you could tell when a tram was coming by using this method, but all I heard was a rather painful clang when Norman back-heeled the pole with his steel rimmed heel.’

‘We gave a cheer as our tram came in sight, glistening in the sun against the dark bulk of Brunswick Chapel, as she made the sharp turn off the Moor. I led the charge upstairs to get into the open front bay, another sure sign of Summer and we began our expedition up to The Crags. The Old Albion Brewery was permeating the balmy morning air with the heady aroma of hops, blending nicely with the fine malt of Ward’s a little further up the road.’

‘Most of our big football matches were played at Endcliffe but as the days shortened we used Michael Road. But for shootin’ in, Clarence Lane was the favourite ground. T’Owd Lane, as it was known, with Polly Brady’s drapery shop at one end and Tommy Green’s pub at the other, was cobbled and rough but had the advantage of having no houses on it. One side was bounded by backyard and lavatory walls and most of the other was taken up by Beeley’s iron foundry. After the men had finished work, Norman, Vinny and I, with one or two other embryo internationals, would assemble for a game. I chalked a crossbar on the wooden gates, old and sagging in the middle. This was handy for the goalkeeper if someone charged him back into the net.’

‘Vinny sometimes provided a ball but on this surface we usually played with a home-made one of tightly rolled newspapers covered with brown paper and then lashed together by yards of string secured by many intricate knots. This missile which was about the size and weight, if not the shape, of a regulation T ball had its drawbacks. For one thing, even when new and in good condition it had no bounce, landing from the greatest of heights with the dullest of thuds.’

‘The game really became interesting after the ball had been in a puddle, of which there was no shortage on T’Owd Lane’s rugged surface. Then it became a matter of ducking instead of heading and first time shots took precedence over fancy dribbling and where all the skills and footwork of Norman, who fancied himself as Billy Gillespie, were rendered useless. The goaly’s lot was doubly hazardous, he being faced by the choice of stopping the soggy lump with his hands and body or kicking it clear first time, which was a bit tricky if a shot came in head high.’

‘As the ball disintegrated so did the standard of play until, amidst cries of approval, what was left of the ball was kicked over the ball into the foundry yard. This was the excuse for a frenzied scramble over the gate and into T’Owd Foundry. Once inside it was curiously quiet; the black sand which covered everything and was deep in places deadened the clatter of our studded boots as we kicked what was left of the ball into a tattered mess of paper and string. Vinny led us out through a loose piece of corrugated iron sheeting which he called his secret passage and we emerged into Mrs Bingham’s backyard.’

‘Over on Smith’s step we sat in the twilight and watched the lamplighter coming up the street, performing a nightly miracle with a single touch of his long pole. “Ah wonder,” mused Norman, as he examined with interest a graze on his kneecap, “ah would fooaks find their way abart at neet if gas lamps weren’t lit?”