You are here: Home>Explore OUR Broomhall>Topics>Art>George Cunningham: Characters of Broomhall ~ Part 10 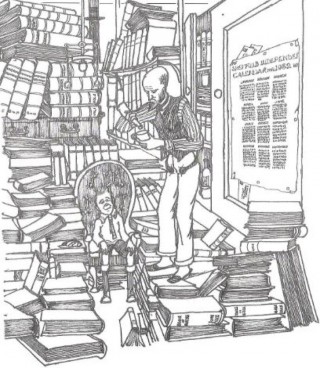 ‘One morning after we had been to the clinic and were walking back up Clarence Street, a man who was standing in the doorway of a house waved to my mother and beckoned for me to cross the road to him. I knew him as Edgar Colcutt, a particular friend of my father, so with Mam saying “You’re alright for a couple of hours, we’re home early,” I went to see what Edgar wanted me for. “Come in,” he invited: “Sit down and have a glass of lemonade.”

‘My father had often remarked when he returned from a visit: “Old Edgar’s a toff, even though he is T.T.” And my host as he stood on his platform and poured the drinks had a certain air of faded gentility about him. He was tall, though slightly stooped, and his lean face was adorned by a grey, pointed beard which wagged when he talked as if keeping time with the words. Around his neck he had a striped, knotted tie but no collar – in order to keep it clean for when he went out. Over a flannel shirt he sported a dark blue waistcoat with silver buttons and more than a trace of snuff. His thin hips were encircled with what I at first thought was a belt which had slipped down but was in fact a leather truss worn outside his trousers.’

‘Descending from his perch, he apologised for his casual turnout, adding, “I always wear it like this indoors, it’s more comfortable.” Telling him that I was a fellow sufferer I felt the bond of friendship strengthen between us as we sipped the lemonade and Edgar, his quiet voice accompanied by his beard, continued: “Your father tells me you like reading and as you’re going to be off school for some time yet, I thought there may be one or two books of interest in my room.”

‘This posed quite a problem because when with some difficulty we entered the room, which was the front parlour of a terrace house, I found it crammed as high as my shoulders with books and papers. There were trenches in between them which led to Edgar’s bed in the corner, to the table and a well-trodden one which finished up at a fireside chair from whence he cleared a pile of magazines. He clambered up onto a stack of books, his head dangerously near the ceiling, opened a cupboard door and brought out a bottle and two cups.’

‘As I sat in the only chair which was recognizable as such, I wondered how much longer Edgar could go on collecting them and still have space to live. Against one wall little corners of a sideboard poked out from under a great mass of heavy leather-bound tomes which looked as if they could topple down at any moment and engulf us. The walls were lined with makeshift shelves, all heavily laden, and even the bed had its quota both on top and underneath. A small gas fire with broken pots peered out of a fireplace which appeared to be built with sets of encyclopaedias and from behind tiers of books on the mantelpiece I could hear the faint ticking of a clock.’

“It’s quite cosy in winter and very convenient,” said Mr Colcutt, as he sat on the edge of the trench alongside my chair. “I know where everything is, though sometimes it may be a little difficult getting to it.” Whilst he was still speaking he climbed up on to the parapet and walked across a small table in the middle of the room, ducking under the gas mantle and from a pyramid of books in a corner he selected three or four and returned by the same route.’