You are here: Home>Explore OUR Broomhall>Topics>Art>George Cunningham: School Life ~ Part 4 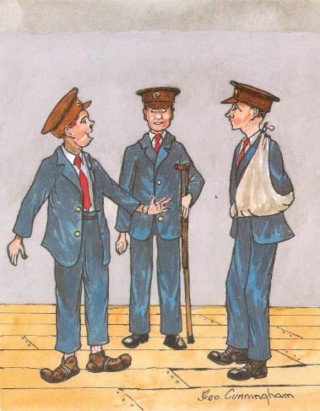 An exciting event caused George and his school friends to be the stars of the show, and also to be given some souvenirs as well as have a tasty meal!

‘All of us were to be kitted out in the regulation army hospital uniform of a bright blue tunic and trousers, white shirt, red tie and a khaki peaked cap. We changed into these at home, then assembled in the school hall in Hermitage Lane at the side of Brunswick Chapel.’

‘Albert Moxay, who had never in his life been so well dressed, remarked as he gazed admiringly at his reflection in the glass panelled door, ‘Ar cud stan’ bein’ shot if thi gennus a suit like dis!’ His military smartness was somewhat marred by his footwear, which consisted of a pair of football boots three sizes too big for him and with the studs taken out, giving the toes a rakish upturned appearance.’

‘On the Big Day, the football field was crowded with thousands of children and grown-ups dressed to represent every country and period of the British Empire. Round and round we went, inspired by brass bands and the tumultuous applause of a vast crowd of admiring people. It’s the soldier’s life for me, I thought, especially when a pretty nurse, nearly my age, re-tied my sling and squeezed my good arm to ease the pain of my wounds.’

‘To end the proceedings, everybody marched to pre-arranged positions and formed a huge Union Jack. We stood motionless and the crowd was silent as the massed bands played ‘God Save the King’. For a few seconds after the last notes had died away, not a sound could be heard. The flags all around the ground hung limply in the calm air and not a sparrow twittered.’

‘Back at our mustering place we were greeted with the welcome sight of long trestle tables laden with sandwiches, buns and a huge copper urn of steaming tea. At the sight of all this food and drink, discipline broke down and we thundered across the bare-boarded floor in a motley rabble.’

‘A strong authoritative voice quelled us immediately: ‘Stop, and stand where you are!’ We froze as still as statues, for it was the commanding tones of Mr Barwell, our headmaster and a veteran of the Great War. His next order was for us to line up in single file at the front of the top table, where he was standing. In spite of his stern face, a happy twinkle in his eye was encouraging, and his following words even more so.’

‘Now, you’ve all done very well. I am pleased and proud of you. Everyone has been a credit to St Silas. I think that we were the best-turned-out party on the ground and all of you kept in step, this is with the sole exception of Master Moxay who appeared to be somewhat hampered by his boots!’ There was a little chuckle at this, but Albert, with his eyes on the food, was unabashed as he licked his lips and used the sleeve of his tunic for a handkerchief.’

‘Before we start to eat,’ continued our Head, ‘in honour of this memorable occasion I am going to present you with two souvenirs, which I hope you will keep and cherish for the rest of your lives.’  ‘I wish he’d get on with it,’ I thought, my empty stomach rumbling. He did so, and from under a cloth behind the table he produced a golden tin with a picture of Their Majesties on the lid. Even better was to follow. As he handed each one of us this gift, it was accompanied by a stainless steel pocketknife engraved with the date of the Coronation. We took our places at the table and did battle with the food.’