You are here: Home>Explore OUR Broomhall>Topics>Art>George Cunningham: Childhood Memories ~ Part 4 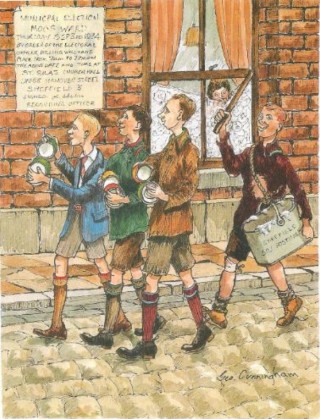 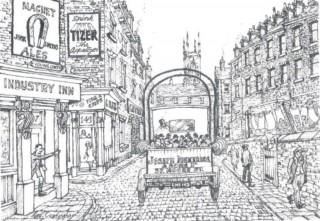 A tour of the area on voting day turned to a battle more scarier than the election debate!

‘Over the last few days posters had been posted on walls and hoardings proclaiming the forthcoming Municipal Elections. On voting day, after tea, the three of us assembled in Norman’s back yard. We all had the regulation equipment for such an important occasion: two empty tin cans apiece. I had rummaged in our dustbin and found a Nestle’s condensed milk tin and a larger one that had once contained Cirio tomatoes. I rinsed them out under the tap, tucked in the jagged lids and tried them out for sound, nodding with appreciation at their volume and resonance.’

‘Norman had a Burgon’s sliced peach can and a Parsley brand salmon tin, and Vinny appeared from his house with a matched pair of Tate and Lyle’s Golden Syrup tins, carefully washed and polished by his mother. The march we were about to embark on was the traditional route passed down by generations by voting day supporters. This was round the lump, which meant tramping down Clarence Street, along Hurst Road, up Humble Road and back on to Michael Road, with an occasional variation down to Bridgefield Road.’

‘The three of us had formed up in good order, line abreast, at the corner of our house. Vinny raised his hand to give the signal for us to strike up the band and start the march, when down the street at a shambling trot came Albert Moxay. His attire was informal; although it was a warm evening he sported a thick woollen maroon-coloured jersey, with snot-stiffened sleeves and a large hole in the front. Over his shoulder was a loop of clothesline from which hung a billposter’s bucket.’

‘We aint gorreny tins at ar ‘ouse. A fon dis in street at side orra barrer,’ he told us, brandishing a large possing stick, where he thumped on the side of the bucket, making a dull unmelodious sound, which could only have been produced by such an unusual musical combination. At first Vinny flatly refused to let him join us because he wasn’t properly equipped but, when I suggested that Moxay could march behind and beat out time for us, he reluctantly agreed. ‘On third stroke,’ shouted Norman, who had promoted himself up to second in command. ‘Thud! thud! thud!’ went the drum and off we marched in a steadfast rank of three, heads held high, waiting for the signal which was not long in coming.’

With a resounding clang of his Tate and Lyle’s. Vinny led us into the time-hallowed election day refrain, every word accompanied by the melodious clang of our cans.

You can’t vote for a better man,

For Jowett is the man,

We’ll have him if we can,

And you can put old Simpson

In your old ash can,

‘Twice around the lump we marched, curtains were parted, people came to their doors and two little lads who were playing hopscotch stopped their game and cheered us on. We swung smartly into Michael Road in good order, ready for another round.’

‘At the back of Pickering’s cardboard box factory two of their big Ford vans, with the canvas tops rolled back, were being loaded up with kids under the supervision of Mr Truelove, the managing director. Although we had no idea who the candidate’s party was whose name we had been chanting, he must have had Mr Truelove’s support because he beckoned to us and helped us aboard.’

‘Walt Bradshaw, the driver, swung the starting handle, heaved himself into the cab very nimbly, in spite of his gammy leg, and off we went for an electioneering cruise around the streets. Our van led the way along Moore Street and, with the backing of about thirty untrained voices and our band, Mr Jowett’s victory seemed certain. Down Young Street, past the tarry smell of Lister’s asphalt works, The Industry Inn, and on to Matthew’s chip shop rolled our merry ensemble, blissfully unaware that we were entering enemy territory.’

‘The first sign of this was a warning shot across out bows, or, to be precise, a tin can filled with a liquid that, hopefully, was only water. It whizzed over Moxay’s cropped head and exploded on the back of the cab, liberally sprinkling the choir, creating momentary panic then expressions of disgust as the contents of the can made itself known to the nasal organs. Instinctively I had ducked down below the van side, but not before I spotted the would-be assassin.’

‘Moxay did as well, because we both shouted at the same time: ‘That were Pod!’ On hearing our approach along Moore Street he must have lain in ambush in the pub doorway, our noise giving him ample time to full his noxious grenade. Shaken but undeterred, we continued our journey in good style back to the cardboard box factory, where we disembarked to make room for another cargo of eager voyagers.’

‘We decided to make one more tour before calling it a day, so for a change of route down Humble Road, we went and started to turn the corner at Mrs Timbo’s shop into Bridgefield Road, putting Mr Simpson into the old ash can with great gusto and feeling. Just as we finished and were gathering breath for another stanza, I heard a louder rendering, putting our candidate into a similar receptacle.’

‘With a backward glance I was startled to see a party of four or five lads, equipped with cans as we were and led by Pod. Billy Podson, whose family had recently flitted from the Wybourne into Green Street, had just started at our school, but his reputation had preceded him. He was two years older than me, podgily but strongly built, with large hands and wrists so thick one wondered how he managed to get his jacket on and off. A sallow, spotty face topped with greasy, lank hair was complemented by small brown stumps of teeth and an outward cast in each eye, which came in useful when he was about to thump anyone, which he frequently did, because his victim thought that Pod was looking somewhere else.’

‘Our voices tailed away into a few stumbling words as Pod’s gang advanced towards us. This encouraged them to a louder clanging and, when they were twenty yards away, Pod let fly with his tin can. A barrage opened up from both sides. The air was full of flying metal. Norman received a direct hit on the head from a corned beef tin with the key still attached. Vinny copped a cocoa tin which exploded on impact, full in the chest, blowing off the lid and scattering brown dust all over his shirt front. I was more fortunate: a pea tin struck me a glancing blow on the shoulder, giving me a fright, but what I thought was blood dripping from my cheek was a green liquid.’

‘I flung my tomato can and missed, then followed up with the condensed milk, which Pod contemptuously parried with a beefy paw. Things were getting desperate: our ammunition was gone and we were outnumbered two to one. Panic turned my legs to water and wild thoughts flashed through my brain. Should I surrender and throw myself to the mercy of the enemy, or run for it, only to be caught and tortured?

‘Pod, at the head of his victorious army, grinned malevolently. Which of us would he thump first? I shuddered to think, as he swaggered slowly towards our cowering little band, savouring his hour of triumph. His eyes, which appeared to be looking at both sides of the street, were horrifying, even more so when he turned his head sideways and focused one of them on me. ‘Narden, big ‘eead,’ was his opening pleasantry, which upset me even more. I knew that I had rather a large head, but not nearly so big as Tommy Tinley’s who once confided in me that his father used to clout him across it, complaining that it had spoilt his Saturday night’s enjoyment.’

‘A last vestige of courage welled up inside me and I squeaked defiantly, ‘Shurrup, cockeye!’ This enraged Pod so much that he brandished his fist and charged full tilt at us. In a blind panic I turned to run, when, from behind, a sturdy arm shoved me to one side.’

‘As I stumbled and nearly fell, I saw that it was Moxay, who I thought had deserted during the battle. He had unlooped the rope from his shoulder and with it he swung the billposter’s bucket in a mighty arc and then let go. It cleared the cobbles by inches and took the running Pod full across his shins. There was a resounding clonk and an agonised screech of anguish as he cannoned back into the troops, taking two of them to the ground with him.’

‘Vinny went into his mother’s house and came out wearing a clean shirt and carrying a plate full of halves of bread cakes spread with best butter and golden syrup. Sweet were the fruits of victory. I licked my sticky fingers, looking longingly at Vinny’s half-finished slice, wishing he’d give me a bite. Then Moxay made my blood run cold. ‘Pod’ll gerris own back, don’t thee worry.’ He was usually right in military matters and I wished he would stay with us, but off he went, banging his possing stick on house walls and the odd door, no doubt causing some trepidation to the occupants.’