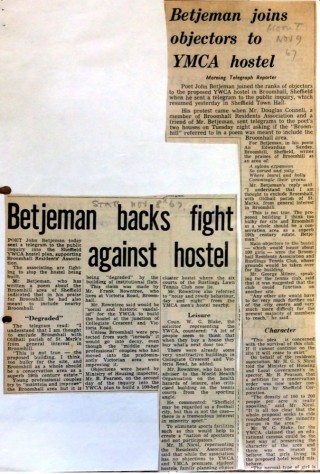 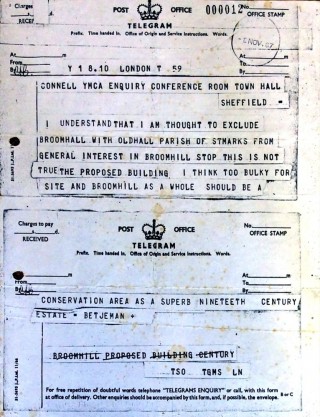 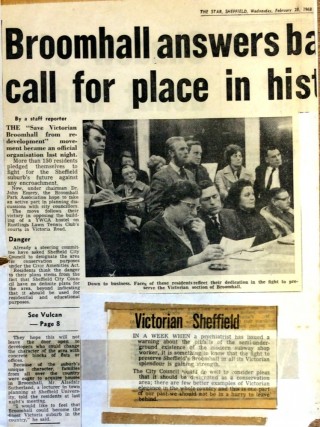 “In 1964 my wife and I came across number 34 Victoria Road, a Victorian Villa built in 1856. It was up for sale and through the selling agent we took a look at it inside and out. It was, or had been, a dancing school owned and run by a well known dancing teacher Peggy Harrison.

We were shown around and it showed all the characteristics of a very well used dancing school, somewhat battered and also modernised, for example, all the doors had been stripped of mouldings and fitted with hardboard panels and sloping plastic handles of 1950’s style, but what really excited our attention was the dancing studio itself which was tow rooms knocked into 32’ long room. It was empty except for a small pile of piano music. What possibilities!

We made a bid and it sold at auction for a very reasonable price and it was ours. We set about restoration and we removed all modernisation features and discovered mouldings, a beautiful fireplace, and typical decorative details everywhere.

Three years after in 1967 one of our neighbours called and with some drama said that the Rustlings Tennis Club opposite our house had told her that the owners of the ground were proposing to oust the tennis club and build a six storey block of flats for the use for women of the Y.W.C.A. The owners of the land were the United Society of the Gospel in Africa. We were shocked. Our views over the tennis courts, to Ecclesall Road and beyond to the General Cemetery would be lost.

Together with our neighbour June Connell we put the problem on paper and printed copies and toured the area to every house we thought might help us to protest. We announced a date for a meeting at our house. We were amazed when fifty people turned up. First, Alistair Sutherland, a lecturer in Architecture at the University arrived and began to question my O.S map of the area where I had detailed what each building was used for e.g. educational, commercial or private.

In no time our living room began to fill. I mumbled a few words, outlining the problem and very soon we had a president, a chairman, a secretary, a membership secretary, a treasurer and an association of residents who proposed we be The Broomhall Park Association. Frank Rowntree turned to me and said “you can be our archivist!”

A more formal meeting was held in the main Hall of the Polytechnic. The idea of a formal protest was mooted-which went to a public enquiry and, with the help of John Betjeman who declared Broomhill as the prettiest Victorian suburb in England and agreed to include Broomhall, the inspector opposed the plan for the Y.W.C.A hostel. There was considerable relief and rejoicing on the part of the Rustlings Tennis Club and the local residents.

Formal constitution was laid out by a lawyer resident and printed and was one of the first pieces to begin the archive, which now has reached 12 box files, forty maps and tow box files of visual material which are particularly interesting showing the four gates to the estate just before they were removed-about 1914 when the estate roads were taken over by The City Council. The original gatehouses at the four corners to the area still exist. When the area was developed as a private estate the gates were controlled by keepers. One is in Park Lane, one is at the corner of Wharncliffe Road and Broomhall Road, one is at the corner of the end of Collegiate Crescent with Brunswick Street, and the most commercialised (Claypenny Estates) is ate the corner of Collegiate Crescent and Ecclesall Road. It is distinctive, as after a fine extension to the north it is now plastered with advertising posters and painted in a garish but soft purple. Not quite in keeping with the conservation area. However, the owner did provide a mart rubbish bin, forecasting perhaps good relations with the locals and also that there might be a rise in the student population as the Polytechnic was to develop the site and become Hallam University, rather than the hotel complex which was rumoured.

Hallam University has developed their site with very modern buildings and the B.P.A has attended liaison meetings with each new proposal and has put its views on conservation, as the site contains some of the finest examples of Victorian Villas in the area. There archivists clearly have designed the new buildings in their own contemporary style. To build new buildings to match the old would be prohibitively expensive, so the conservation area contains old and new.

Where planning applications are made for new build, extensions and so on in the area the B.P.A informed. There are also volunteers who monitor all applications for comment. When the B.P.A was formed in 1967 there was one conservation area in Sheffield around the Cathedral and Cutlers Hall. The second was declared as our area bounded Broomgrove Road, Clarkhouse Road Wharncliffe Road and Ecclesall Road, and with some adjustments is basically the same now. There are now over 40 conservation areas in the Sheffield area.

The B.P.A has met regularly over the years and has, with the police, moved prostitutes form Broomhall Road out of the area, restored the Webb Methane gas lamp in Park Lane, sent representatives to the Broomhall community (Barry Cummings) and the Broomhall Forum (Barry Cummings and myself), and has made countless comments on building applications by residents-the success of which have depended on government policies at the time, sometimes very restrictive and sometimes very lax-to the puzzlement of some local residents.

The fate of an almost derelict and abandoned Broomhall was saved by David Mellor, the famous designer/cutler who totally restored the building as his home and cutlery manufactory. He served on the B.P.A committee for several years before moving to Hathersage. His original home was built in Park Lane and is an elegant design typical of the 1960’s cubic style and is made of plate glass and brick and matches the style of the multi-storey block between Broomhall Road and Victoria Road (Woodville), now closed as student accommodation.

Included in the conservation area was Broomhall Place which was demolished in the late 70’s as unsafe. It dated from the early 19th century and had been sadly neglected. It was replaced by a reduced Georgian style building with the original stone name pediment put in place. The building was part of the huge estate extending as far as Springfield School near the top of Division Street.

The whole area was resurfaced in the early 1970’s and fresh curbstones replaced many crumbling edges. Some original edgestones still exist at the lower end of Collegiate Crescent, on the Hallam University side. There are speed bumps as speed restriction and many small repairs to the road surfaces, as in many other cities in the country. The B.P.A put many temporary 20 mph speed signs in the eighties attached to lamp posts but cars still travel very fast.

Local residents spent much time in conjunction with the local authorities restoring overgrown woodland in the Wharncliffe Road area and the area at the end of Park Crescent (Lynwood Gardens). Sadly, some front gardens have been converted into car standing, but if no garage space is available this is the only solution. Generally the whole area has been improved but some controlled restraint has been required, controversially.

Residential change has meant young families who knew each other have been replaced by new ones and the process continues. There is a lot of neighbourliness, namely: the B.P.A summer gathering in Park House with generous hosting by Will Emery, the owner whose family house he retains. His father Professor Emery was a distinguished pathologist at the Children’s Hospital and was the B.P.A’s 1st chairman.

A street party was held in Victoria Road two seasons age to celebrate the Jubilee. The tennis club functions as ever and has a large thriving membership. So our efforts years ago have been worthwhile.”