You are here: Home>Latest contributions>Film: Tram Ride through the City of Sheffield (1902)

Film: Tram Ride through the City of Sheffield (1902)

An amazing view of the Edwardian city 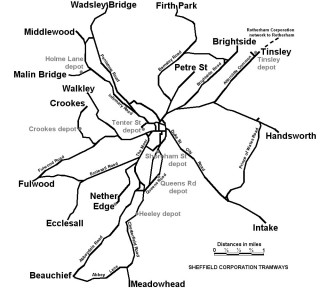 Trams were an integral part of the public transport system in Sheffield for many years – from the first horse-drawn carriages in 1873 right up until the closure of the network on 8th October 1960.

In 1899, the first electric tram ran between Nether Edge and Tinsley. By 1902 all the routes were electrified, and by 1910 the network covered 39 miles.

And one route of particular interest ran down Abbeydale Road and  London Road, across and under what is now St Mary’ Gate and  the Manpower Services building, and on up the Moor towards Fargate and beyond. 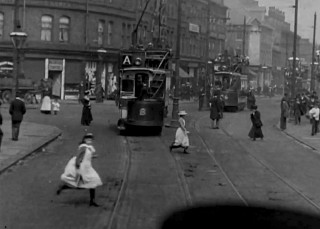 Still from ‘Tram Ride through the City of Sheffield’ (1902). Photo: British Film Institute

The 4 minute film ‘Tram Ride through the City of Sheffield‘ consists of a “driver’s-eye-view” of sections of this last route. Produced in 1902 by the renowned Mitchell and Kenyon company, it provides a unique glimpse of the bustling streets of the city centre in Edwardian times.

It is certain that many Broomhall-ites used these trams; perhaps some of them can also be seen here doing their shopping and running errands…

Thereafter it is difficult to identify the location of footage – other than the lovely long section running up the Moor which starts at around the 60s mark. Sadly all of these buildings are now long-gone, replaced by the concrete boxes so popular during the 1950s and 1960s.

But just who was the enigmatic conductor “C118” that we see so clearly at 32s?

The BFI website provides the following additional information on the film:

“Apparently filmed from just behind the driver, this evocative tour takes in the London Road, the Moor, Pond’s Forge, Haymarket and Fargate: a three-mile journey. In these early days of electric trams (note the poles holding the wires) people happily hop on board while they’re moving, with the agility of Buster Keaton. Ninety years later, Sheffield would pioneer the return of urban tram systems.Circumstantial evidence suggests that there may originally have been more footage than the two rolls of film that survive here. That would help explain some occasionally confusing geography in these items. The tram filming was among a clutch of jobs that Mitchell and Kenyon undertook in Sheffield for Ralph Pringle, one of their most frequent commissioners. Several of the resulting films survive in the Peter Worden Collection of Mitchell and Kenyon films preserved at the BFI.

Pringle exhibited these films under his fancifully titled company name, the North American Animated Photo Company, to reportedly massive success in shows at the city’s Albert Hall. These would also include Sheffield footage shot by locally-based producer Frank Mottershaw, together with subjects of general interest.” 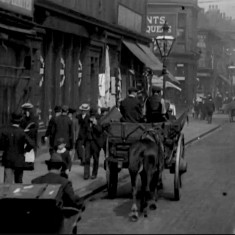 Still from 'Tram Ride through the City of Sheffield' (1902)
Photo: British Film Institute 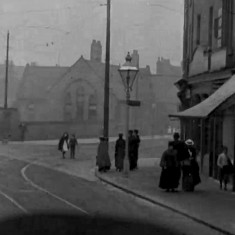 Still from 'Tram Ride through the City of Sheffield' (1902): Junction of London Rd and Queens Rd
Photo: British Film Institute 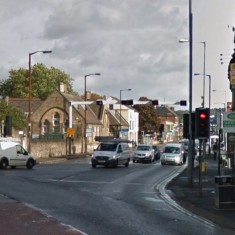 Still from 'Tram Ride through the City of Sheffield' (1902): Junction of London Rd and Alderson Rd
Photo: British Film Institute 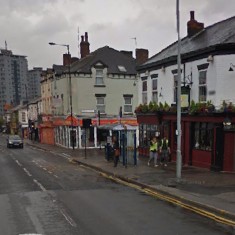 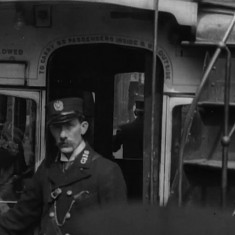