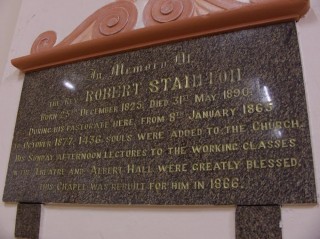 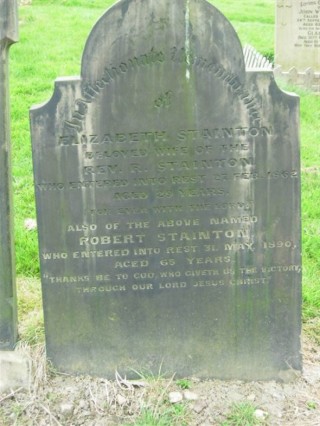 Reverend Stainton’ s health deteriorated over the period of 12 years and he sadly passed away on 31st May 1890. At his request his interment took place at Huddersfield.

The transcribed press articles give details about his interment at Huddersfield and the funeral sermon at Garden Street Chapel, Sheffield.

INTERMENT OF THE REV. R. STAINTON

The funeral cortege as it arrived from Willoughby/ Willerby, Hull, was met the station by Mrs. Stainton, Mr. James Stainton, and other relatives of the deceased, also by a number of friends from the Garden Street Chapel, including several the deacons and their wives. The service in the chapel was conducted by the Rev. John Calvert and the Rev. H. J. Boyd, of Sheffield, and at the grave side a brief, earnest address was delivered by Rev. Dr. Bruce, of Huddersfield.  There was a large and sympathetic gathering of people to witness the funeral. The interment took place Huddersfield at the express desire of the deceased. Had it taken place in Sheffield there would have been immense concourse people present, judging from the many inquiries made by former friends of the Church. The deceased gentleman has been laid aside by serious mental affliction for nearly 12 years, and it speaks well for his labours in Sheffield that memory is still green among us. He was 65 years of age.

There was a large congregation on Sunday night, at Garden Street Chapel, when the Rev. H. J. Boyd delivered a funeral sermon in memory of the late Rev. Robert Stainton. The choir, under Mr. W. Sissons, sang as an anthem Dr. Stainer’s “What are these arrayed in white robes,” and the solo, “O, rest in the Lord,” was given by Mrs. Warburton. Mr. Rimmington presided at the organ, and played appropriate voluntaries.